To write a new regional history focusing on interactions between human societies and natural environments in terms of water, a major task is to collect information on the nature in the past and to convert it into analytical data. Searching for new materials, reexamining conventional data from different perspectives, and fill in the vacuum of data with models and simulations are the crucial tactics. This section features essays introducing the key data and archives in this project and interviews with the scholars engaging in their analyses.

Shipping intelligence refers to the records of ship arrivals and departures, which were published in newspapers and journals by Westerners from the 19th century to the mid-20th century. Once steamships were put into operation in the mid-19th century, port cities worldwide were connected by regular liners, and maritime transport became more widespread as a stable and familiar service for the general populace; consequently, information on ship operations became essential for daily life. For example, shipping intelligence provided people with information on the location of the ships carrying the parcels they had sent, or whether the ships their friends and family were traveling on had arrived safely at their destinations. In this way, shipping intelligence was transmitted widely when steamships were at their peak as a means of global transportation, and records remain in newspapers published worldwide. However, in the second half of the 20th century, the proliferation of airplanes led to ships gradually retreating from center stage as a means of long-distance travel, and simultaneously, shipping intelligence disappeared from the pages of newspapers.

Shipping intelligence is also used in historical research. For example, passenger lists have been used to identify the movements of historical persons and trace the roots of Westerners who arrived as immigrants. In Canada, Australia, and New Zealand, immigrant databases have been constructed by organizing the passenger lists included in shipping intelligence. In addition, the records of each ship’s arrival and departure are suitable for discovering regional circulation routes. Research to analyze logistics structures and networks by focusing on this point has been observed since the 21st century.

Assisting such research are projects, underway in public libraries worldwide, to publish past newspapers online as digital images. Before digitization, it was extremely difficult to systematically gather shipping intelligence from newspapers—they are published daily and have diverse articles, so manually searching through each took time and effort. Today, though, the conditions allowing a comprehensive search of newspapers published in various locations are being created. The countries most vigorously pursuing this are Australia and New Zealand, and the websites of their respective national libraries allow users to browse and search for free. In Asia, Hong Kong and Singapore are moving forward with similar projects. Such projects are also underway in Europe and the United States, but most of these being fee-based place pecuniary restrictions on their use by the general public. However, because some countries, like the Netherlands, provide them for no charge, free publication of newspapers as historical materials is expected to spread throughout the world in the future.

Without doubt, growing digitization will further expand shipping intelligence’s potential as historical material; however, this potential has limitations, and it is necessary to be aware of this aspect when using shipping intelligence for research. The greatest limitation, as mentioned earlier, is that shipping intelligence is material prepared by Westerners for Westerners—this means that the information they did not require is missing. For example, the movements of non-Western, native ships are not recorded at all. Those that are recorded are limited to Western steamships and sailing vessels, and the junks and dhows that were active in Asian seas, for instance, make no appearance. Furthermore, only Westerners’ full names are given in passenger lists; local people are merely described as a group along with the number of people on the ship.

Nevertheless, using shipping intelligence in Asian historical research can allow us to examine the local social economy. For example, shipping intelligence can contribute to the discovery of local logistics networks, as already mentioned, because trade and other public statistics prepared by government institutions are recorded systematically and in detail in the case of international trade, but statistical information on domestic trade is either severely limited or completely absent. This is because information retained for historical purposes tends to be statistics prepared in conjunction with the task of tax collection; thus, matters that are not taxable do not easily attract the government’s attention for statistical purposes. However, shipping intelligence was prepared in response to the demands of the Westerners living there, and therefore, although it is limited to Western ships, it also records trends in domestic logistics that cannot be seen in trade statistics.

This study aims to reproduce shipping intelligence as historical economic statistics. Shipping intelligence is material that can supplement trade statistics while depicting the state of trade at a local level, which is difficult to observe through trade statistics. This idea was developed in the research project for a grant-in-aid for scientific research (A) “Plurality and Variety of the Global Trade: Dynamics and Institutions of the Intra-Asian Trade during the ‘Long 19th Century’” (principal researcher: Shiroyama Tomoko, University of Tokyo, AY2012–15), and has inherited organization work for several other research projects to date. At present, our shipping intelligence database has reached a level that comprehensively covers the Asia-Oceania region, with 1913 serving as an axis—this was the year immediately before World War I, and represents the final phase in the 19th-century global economic structure centered on the United Kingdom.

Preliminary organization and analysis of the database allows us to detect global trade structures that could not be recognized via trade statistics. For example, Figure 1 shows the scale of ship arrivals and departures in the Asia region. The scale is represented by the total tonnage of ship movements over one year. Figure 1 shows intra-Asian trade divided into its four component regions: The Empire of Japan, China, Southeast Asia, and South Asia. The figures in circles indicate the ship movement volume within the region, and the arrows represent the same between regions—this reveals that movement volume within each of the four regions was greater than that between them. When trade statistics were used, the figures in the circles were either unavailable or, when available, gave estimates that were smaller than the figures shown in Figure 1. Shipping statistics provide a sense of the scale of logistics volumes within regions, which trade statistics do not provide.

The above analysis results are one part of the fact discovery utilizing shipping intelligence. Use of geographical information systems (GIS) in the future is expected to enable more fact discoveries in line with local economies. 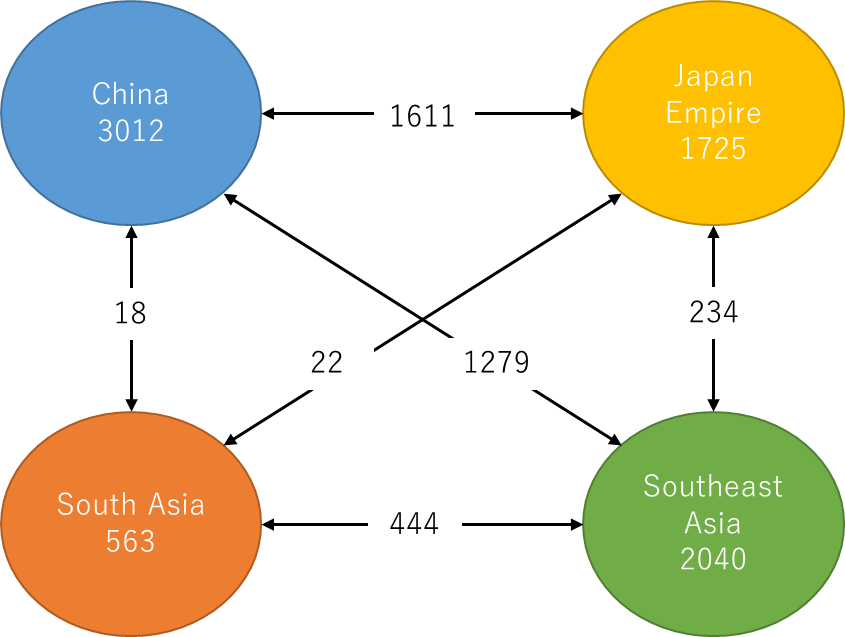