Background and Purpose of Study

The Deccan Plateau in western India is part of the Afro-Eurasian interior arid zone, and despite the seasonal monsoon rainfall it receives, it is the driest region among the target areas of the entire research project. In such an environment, water resources are limited, and historically, water shortages greatly influenced agriculture and human activities. In particular, the famine caused by a massive drought in the Deccan in 1876 was linked to the famine that occurred the following year in northern India, resulting in the unprecedented Great Famine of India (hereafter “Great Famine”) that affected a large part of the Indian subcontinent. The Great Famine lasted from 1876 to 1878 and caused the death of about five million people according to official estimates, with some estimates putting the number of deaths as high as eight million. After the Great Famine, an investigation committee was formed that covered all of British India, and based on the results of the investigation famine countermeasures were developed. Historically significant from this perspective, the Great Famine has been studied using various historical statistics on population, agricultural production, trade, epidemics, etc. However, despite the fact that the famine was caused due to drought, statistics on weather and water resources have not been fully utilized. The purpose of this study is to reconsider the occurrence of the Great Famine and its impact on an agrarian society in the western part of India, the Deccan Plateau, focusing on the monsoon climate and hydrological data.

The novelty of this study is that it reconsiders the occurrence and influence of the Great Famine by combining two different approaches: a historical approach using historical materials and an engineering approach using simulations.

The historical approach was used to analyze famine-related historical materials for western India, namely, the Bombay Presidency. The India Office Records in the British Library and the Records of the Secretariat Departments in the Maharashtra State Archives, Mumbai in India, contain a large number of historical materials on the Bombay Presidency. Between both record-sections, the latter keeps detailed records on meteorological data particularly in the Famine Branch of the Revenue Department. The meteorological data in the Famine Branch mainly consist of daily and monthly rainfall records in the rainy season (June-September) of 1876 and the following year, when the Great Famine began. Daily rainfall records are often missing, making it extremely difficult to analyze the changes in rainfall during the Great Famine. Meanwhile, the monthly rainfall records provide continuous data for the rainy season of 1876-77, and also describe the average rainfall prior to the Great Famine, which makes it possible to analyze the rainfall changes during this period. However, there are only 24 observation points in the nine districts (total area: approximately 114,226 square kilometers) of the Bombay Presidency. The historical approach using meteorological data captures only point-to-point changes in the rainfall, and there is limited data to reconsider the Great Famine from a hydrological perspective.

Therefore, this study uses an engineering approach to create a simulation of the hydrological conditions during the Great Famine to compensate for the limitations of the historical approach. The target area of this study was set in detail to create a hydrological simulation. The western part of India on the Deccan Plateau, which we are studying, is part of the Krishna River basin (the area within the red boundary in Figure 1) which originates from the Western Ghats near the west coast of India and flows into the Bay of Bengal. This study applied an engineering approach within the Krishna River basin, focusing on the basin of its tributary, the Bhima River (light blue area in Figure 2). While the historical approach only showed changes in rainfall, the engineering approach focused attention on changes that directly affect human activities such as agriculture, and simulated changes in soil moisture and water flow during the Great Famine. 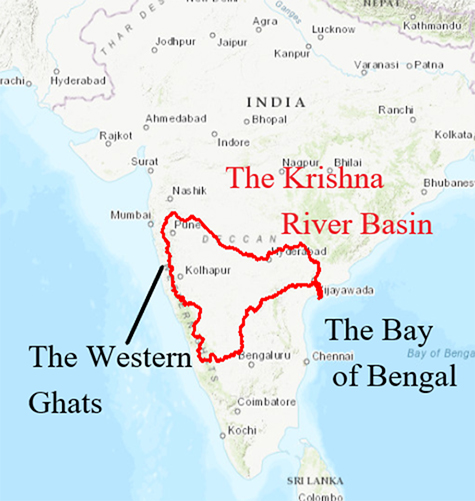 Figure 1: The Indian Subcontinent and the Krishna River Basin 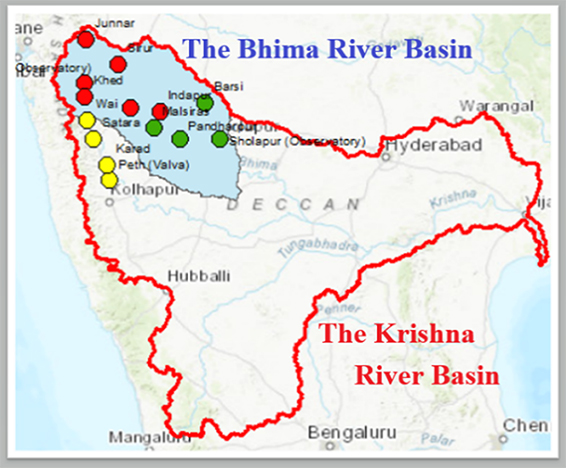 Next, this study combines the results of the historical and engineering approaches. Since both outcomes were derived in completely different ways, it was extremely difficult to simply compare and integrate the figures and their variations. Therefore, we reconstructed the Great Famine by considering the results as spatial information and overlaying both results using GIS (Geographic Information System). For example, by overlaying the data from the simulations of soil moisture on the monthly rainfall data held by the Famine Branch, we were able to gain an understanding of the hydrological data at the beginning of the Great Famine through an engineering approach, which prior to this could only be understood in terms of the historical approach (part of the results of this study can be seen in “Gallery”). The core objective of this study is to resolve the inconsistencies between the two data sets, which will be revealed by combining them, and clarify the circumstances of the occurrence of the Great Famine. Although some issues remain to be resolved and analysis and consideration is incomplete, this study opens a new direction for the study of history.

We found a variety of relevant historical materials on the impact of the Great Famine on an agrarian society in the Famine Branch of the Revenue Department. For example, the Reports on Death Registration record the number of deaths by region in 1876-77 with details including the age, gender, and causes of death. Figure 3 summarizes the causes of death in 1876-77 by district. We can see that the number of deaths due to cholera (light blue) in various districts in the southern Deccan region in 1877 was particularly high (See Figure 3). To review the impact of the Great Famine on an agrarian society while focusing on hydrology, this study attempted to demonstrate some of the effects of the hydrological changes due to the Great Famine on rural communities by combining the changes in rainfall in the Deccan region in 1876-77 and areas that had a cholera epidemic using GIS (see “Gallery” for the results).