This research aims to explore how natural disasters caused by extreme weather events, such as floods (excessive rainfall) and droughts (lack of rainfall), affect societies in Asia. This project focuses on the massive flood that occurred in the basins of the Yangzi and Huai Rivers in 1931. According to the report of the National Flood Relief Commission 1931–1932 published in 1933, the flood caused serious damage to an area of 169,000 square kilometers or 65,000 square miles (exclusive of the lakes), and less severe damage to at least 12,500 square kilometers or 5,000 square miles (Report of the National Flood Relief Commission: 1931–1932, Shanghai, 1933. p. 4). The affected area was approximately equal to the whole of England plus half of Scotland, or the states of New York, New Jersey, and Connecticut combined. A survey of the flooded areas conducted in October 1931 showed that approximately 4.2 million farm families were affected. At an average of six persons per family, the total number of affected people was estimated to be 25.2 million (The 1931 Flood in China: An Economic Survey by The Department of Agricultural Economics, College of Agriculture and Forestry, The University of Nanking in Cooperation with the National Flood Relief Commission. Nanjing: University of Nanking, College of Agriculture, and Forestry, 1932, p. 10).

How did the flood in 1931 cause such an unprecedented disaster? To answer this question, this project reconstructs the flood process and examines its socio-economic impacts.

Methods and analyses (1) Reconstruction of rainfalls and floods

When China opened up to global trade from the mid-19th century, missionaries and Chinese Maritime Customs at the treaty ports started to regularly report weather and water levels under their jurisdictions. From the 1920s, the magazine Weather Monthly recorded daily meteorological data from several locations (as shown in Figures 1 and 2).

Figure 1. Image of the records from Weather Monthly 『気象月刊』March 1931 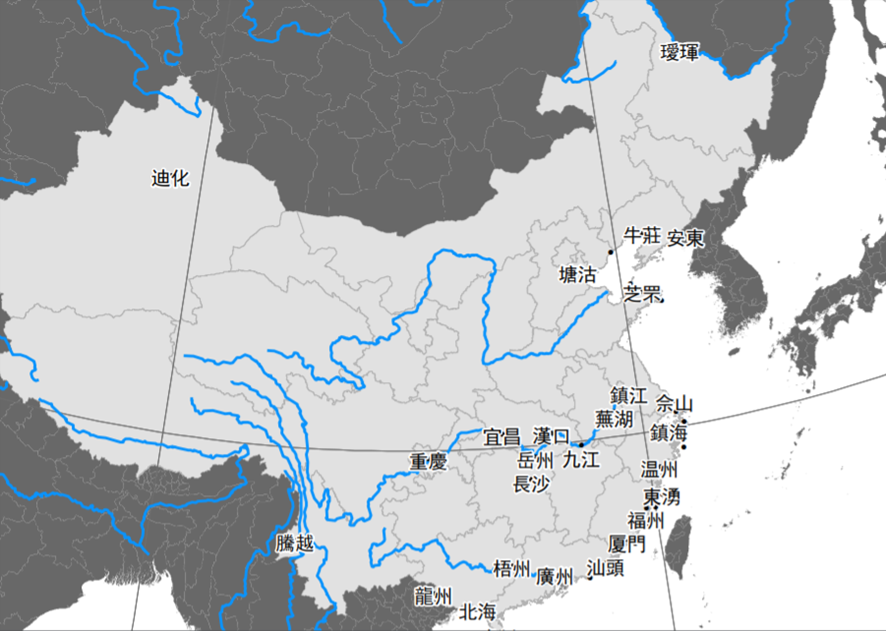 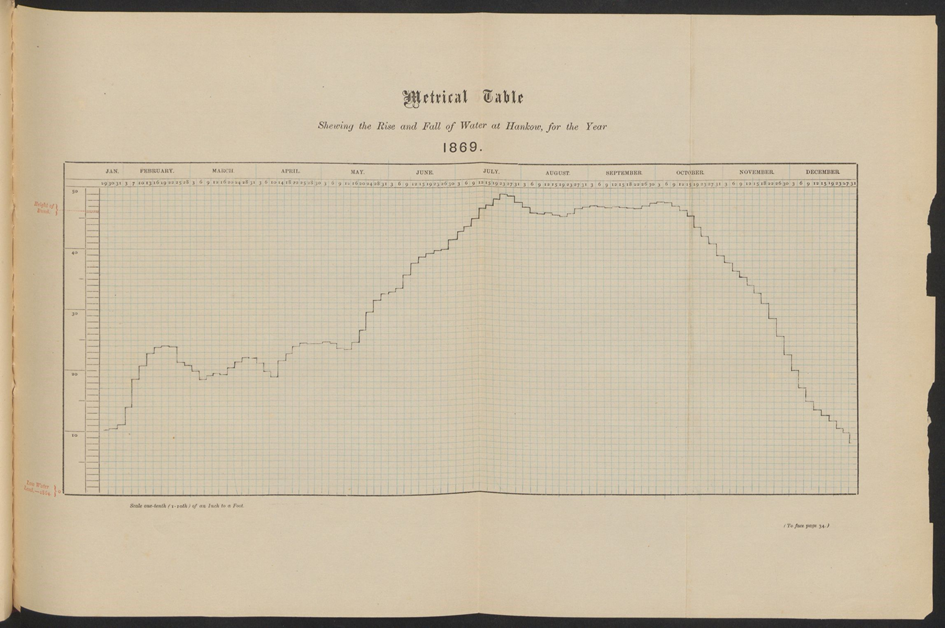 By constructing a meteorological database from these long-overlooked contemporary observations and then applying hydrological models and analysis methods to the data, we can reconstruct the natural environment at a time when socioeconomic activities can be examined. This project is particularly focused on flood analysis. Flood analysis is a technique that uses rainfall distribution, topographical data such as elevation and land usage, and river cross-sectional data to calculate the excess rainfall, effluence, and flooding in the river basins. Figure 4 explains Rainfall-Runoff-Inundation (RRI) model that this project employs for flood analysis. The elevation data used here are derived from HydroSHEDS and provided by the United States Geological Survey (USGS). Weather observation data measured by Chinese Maritime Customs at the time were added to the 2°grid rainfall data of the last 150 years, which have been provided by the U.S. National Oceanic and Atmospheric Administration, (NOAA) to obtain precipitation data.

(2) Various dimensions of the disaster

Examining multiple hypotheses with various historical data and archives is key to understanding the social impacts of natural calamities. For example, the College of Agriculture and Forestry at the University of Nanjing investigated the flooded area in October 1931. The famous agricultural economist, J. Lossing Buck, served as the Director of the Survey. They finished tabulating a large amount of data in January 1931. Their report contains statistical data on the condition of the flood, such as its depth and the economic and social losses, including human and animal casualties, damage to property, and failure of crops. This project adds the data on the map and layers it with the reconstructed flood to examine how the timing and site of the flood tends to influence the disasters at different localities.

The investigation reported that among the causes of death during the flood, the rate of sickness (70 percent) was observed to be higher than that of drowning (24 percent). To investigate the lives in the hydrosphere, Chinese Maritime Customs also paid much attention to the relationships among water, health, and diseases (see Data & Archives: Interviews to Takeshi Hamashita).

The rice price index indicates that the failure of the crop in Hunan, which is a major rice-growing area (Figure 5), impacted the regions along the Yangzi River (Figure 6) through the domestic rice market. (Tomoko Shiroyama) 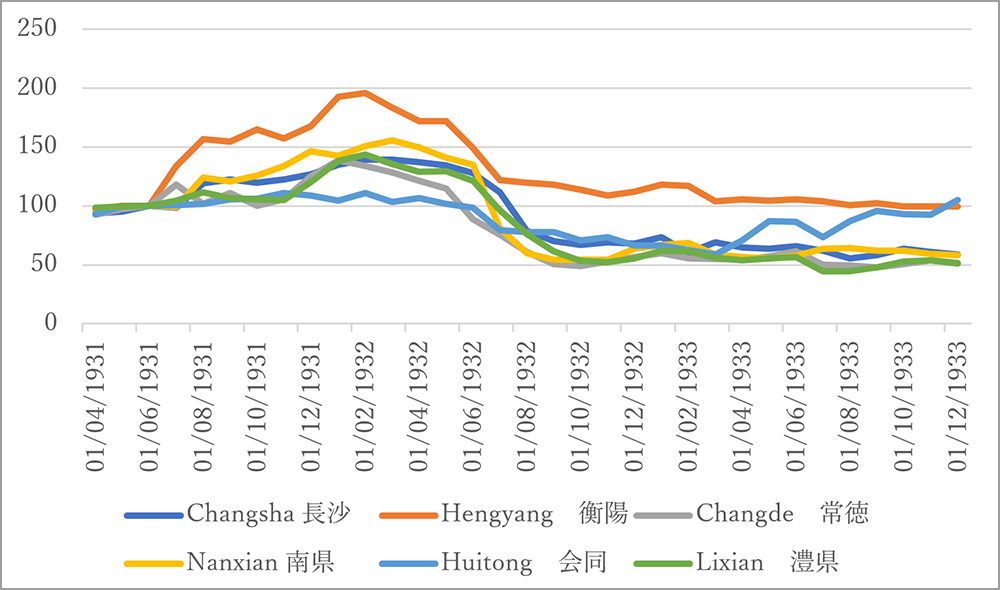 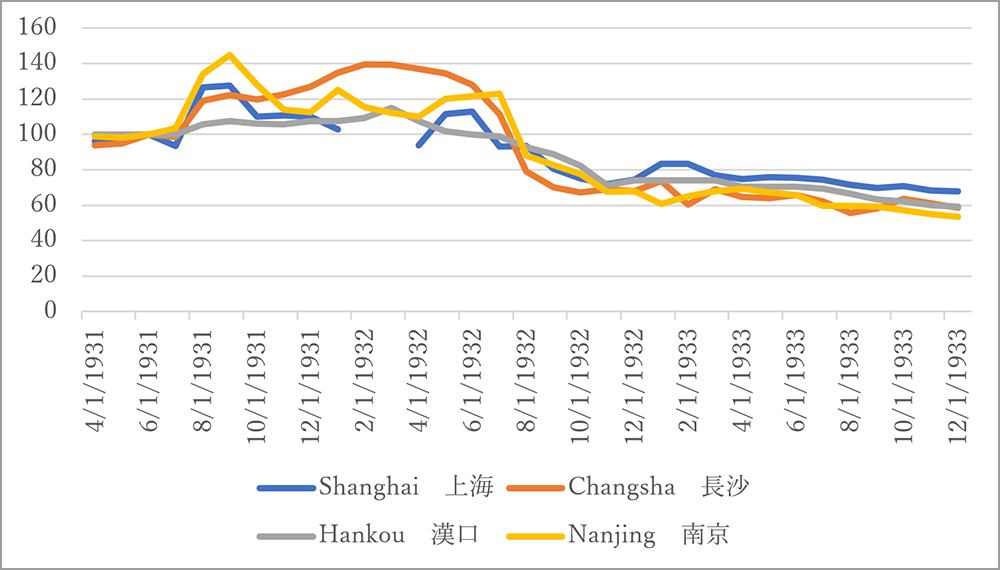