The “Natural Disasters and Social Change” project focuses on natural disasters such as floods and droughts that hit a particular region and identifies the responses of individual societies. Therefore, when we attempt to obtain an overall view of Asia over a month or a year, what kind of relationships did the hydrosphere in each region have? Recent research on Asian socio-economic history has revealed that farm management in the region has been mostly linked to the market through production, sales, and consumption of commodity crops. In addition, in Japanese academic circles, Asian maritime history has attracted a great deal of attention, detailing highly mobile and modern coastal communities. What characteristics can be highlighted if we consider such distribution and movement, seen as a socio-economic phenomenon in the past, based on the relationship with climate and weather and the linkage between hydrospheres? For example, did crop failure due to excessive rainfall or drought in one hydrosphere exert influence on other areas in the region through the market? Did inter-regional trade function as a safety net in response to abnormal weather conditions? In this context, the concept of virtual water trade can be incorporated in the discussion of inter-hydrospheric linkages through distribution and migration.

Recently, water-related research has developed the concept of virtual water trade, which considers the amount of water required to yield agricultural and livestock produce to move across the borders in accordance with their export and import among the countries. (Taikan Oki, ‘Virtual Water Trade’, Water Resources Science Vol. 52, No. 5 (2008): pages 61-82). The analytical viewpoints of capturing agricultural crops as water-embodied goods and trade to adjust water surpluses and deficiencies in various regions are effective in considering trade among Asian hydrospheres.

This project focuses on rice, which is the staple food and key commodity in the region. Regarding climate and rice cultivation in Asia, data on major water systems and production areas such as the middle reaches of the Yangzi River (China), Bengal region (India), Chao Phraya River basin (Thailand), and Mekong River basin are collected, sorted, and examined. Simultaneously, trade statistics of Singapore are used to analyze rice trade and price trends from the 19th century to the first half of the 20th century.

In examining inter-hydrospheric linkages, the base year shared among project members is 1918-1919. A strong El Niño phenomenon occurred that year, that is, the sea surface temperature rose was higher than that of a normal year in the area from the vicinity of the international date line of the Pacific equator to the coast of South America, and the phenomenon continued for about a year. It is considered to be a factor that played a role in the global abnormal weather that year. 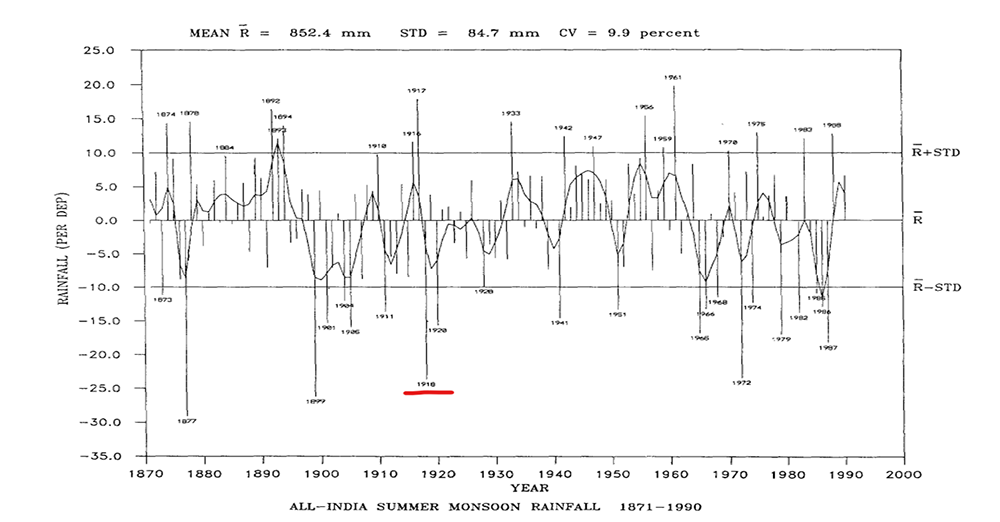 Paul Kratoska, an expert on Southeast Asian economic history, has pointed out that the attempt by the colonial government to address the rice crop failure in India in 1918 by means of trade control of Burmese rice caused major disruption in the rice markets in Southeast Asia (Kratoska, Paul H. 1990. “The British Empire and the Southeast Asian Rice Crisis of 1919-1921”. Modern Asian Studies 24 1: 115-146). Nevertheless, considering the extreme weather caused by El Niño, the crisis in the rice market was not limited to South and Southeast Asia under the rule of the British Empire. It was related to incidents in East Asia such as the rice riots in Japan, which have been interpreted in reference to domestic political factors. We attempt to shed light on the close linkages among hydrospheres, based on how the loss of rice due to drought or flood damage in a particular region abnormal weather shocks caused by El Niño led to the crises throughout Asia, through the chain of production, distribution, and consumption. (Tomoko Shiroyama)